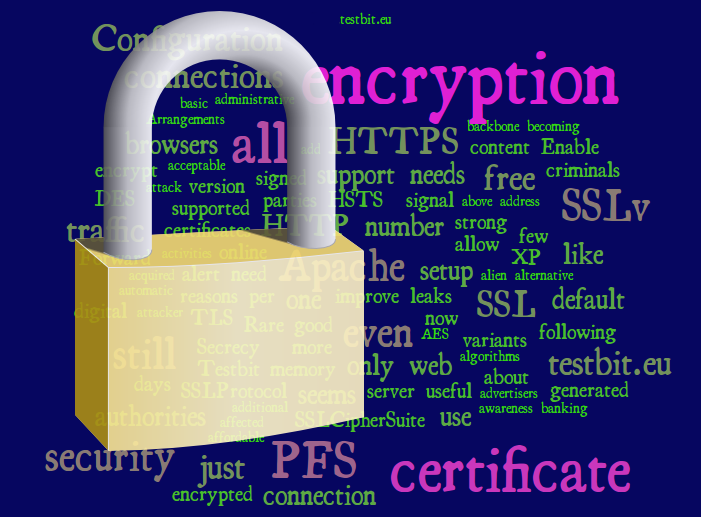 The basic need to encrypt digital communication seems to be becoming common sense lately. It probably results from increased public awareness about the number of parties involved in providing the systems required (ISPs, backbone providers, carriers, sysadmins) and the number of parties these days taking an interest in digital communications and activities (advertisers, criminals, state authorities, voyeurs, …​). How much to encrypt and to what extend seems to be harder to grasp though.

A lot of reasons exist why it’s useful to switch to encryption of content and all data transfers by default (Ed). This has been covered elsewhere in more depth, just a very quick summary could be the following:

Even with good certificates in place and strong encryption algorithms like AES, there’re good reasons to enable use of perfect forward secrecy (PFS) for encrypted connections. One is that PFS means each connection uses a securely generated, separate new encryption key, so that recordings of the connection traffic cannot be decyphered in the future when the server certificate is acquired by an attacker. For the same reason PFS is also useful to mitigate security issues like heartbleed, since the vast majority of generated connection keys are not affected by occasional memory leaks, in contrast to the permanent server certificate that is likely to be exposed by even rare memory leaks.

I investigated the administrative side of things for default encryption of all testbit.eu traffic, which also hosts other sites like rapicorn.org. It turned out a number of measures need to be taken to yield an even mildly acceptable result:

The Apache configuration bits for TLS with PFS look like the following:

Even stricter variants would be disabling 3DES and SSLv3. But it turns out that IE8 on XP still needs 3DES. Also Firefox-25 on Ubuntu-1304 still needs SSLv3. I still mean to support both for a few more months. This is the stricter configuration:

Using this setup, I’m now getting a green A- at SSL Labs for Testbit: SSL Test. Further references and tips can be found at BetterCrypto.org.

I’m happy about additional input to improve encryption and its use throughout the web, so tell me what I’ve been missing!