Just like LinuxTag last year, I went to Berlin the past week to help running the Gnome booth for LinuxTag 2008.

Due to a sports accident, our booth bunny Sven Herzberg unfortunately couldn’t make it, so on Tuesday I took over booth management and merchandise from him and hurried to Berlin in an ICE instead of a car as was originally planned. In Berlin, I met up with Mathias Hasselmann who brought the European Gnome event box and together we set up the booth until late in the night. 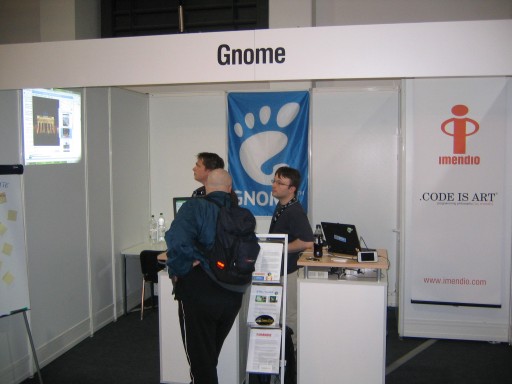 On Wednesday morning, Michael Köchling and Christian Dywan arrived, so we had enough people to properly man the booth. Michael seems to be an early riser, since he managed to show up at 09:00 for all days, so i passed the booth keys on to him.

Around lunch time, I was dragged away for an interview about business involvement in free software and Gnome in particular by Malgorzata Ciesielska, a business school student from Copenhagen. She also interviewed other people like Lennart Poettering who also sporadically hung around our booth.

Later that day, Lennart and i went over the new libcanberra API in a lengthy discussion. Libcanberra is a new library for playback or activation of sound events in response to desktop actions that Lennart currently works on. We talked about the needs of timing information for some usage cases, possibly also dispatching forced feedback controls via the library and implementation of a Gtk+ module to hook canberra functionality up with GUI events. What turned out to be a bit tricky is to derive actual semantic information from the low level X event notification that Gtk+ signals proxy, such as dialog-confirmed, dialog-cancelled, menu-item-selected, menu-item-cancelled, combobox-popup, combobox-selected, combobox-cancelled, etc. This extraction requires significantly more logic and special casing of event notification than Lennart apparently had originally hoped for.

On Thursday I attended the Linux Kernel - Quo vadis? talk by Thomas Gleixner which was quite interesting. I managed to catch him afterwards to talk about the prospects of having a memory pressure signal in the Linux kernel. For GLib and Gtk+, this’d be quite useful to voluntarily release pixmap or GSlice caches, particularly desired on embedded platforms.

Friday I sat down with Vincent Untz for a very productive discussion about Gnome/Gtk+ release prospects, autotools, intltool features and more. Later I had a chance to chat with Alexander Neundorf about KDE’s recent CMake migration process. Overall, they seem to be pretty happy with the results. Major benefits from migrating from autotools to CMake seem to be:

On Saturday the last day of the conference, I attended Anne Østergaard's presentation about Gnome Foundation structures and achievements, the slides of which are available here: The GNOME Foundation (PDF).

After that, I went to Jono Bacon's talk in which he explained how the free software community is a creative and productive community, which sets it apart from other common community types in our society (usually fan communities). He went on pointing out how this collaborative and open community as a whole (and thus every significant contribution to it) impacts and gradually changes the really big IT companies from within in an unprecedented manner. Come to think of it, this is an incredible achievement that we should rejoice in, especially because it is a morally correct change in that it strives towards openness.

All in all, it was a nice conference again. Personally, I particularly enjoy meeting up with other hackers for productive face to face sync ups. So I’d like to thank Christian and especially Michael for their great efforts in patiently answering bypasser’s Gnome questions at the booth, while I wandered off to talks or had technical discussions in its back.