As announced by Hallski, Sven, Mitch and me went to LinuxTag 2007 and operated the Imendio and GNOME booths. As usual, Sven did a great job nurturing random users approaching the booth, together with Mathias Hasselmann and Michael Köchling. I put more focus on the amazingly large program of the conference, of which I’ll give a short roundup here. 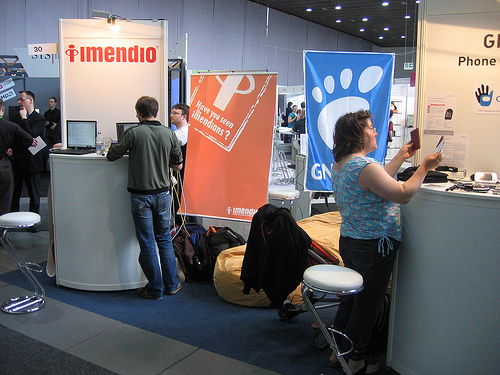 The Xen keynote was on Wednesday. Xen 3.0 comes with some interesting new features, it’ll introduce IO virtualization and supports new virtuallization technologies from Intel and AMD. One important lesson I took away from that session is that using virtualization aware drivers on the guest OS can boost performance from roughly 10% using generic virtualization techniques, to more than 90% of the ideal performance throughput (native host OS performance).

This day, there was also the ZODB3 talk. This is an object database which can be used completely independently from Zope, it provides a very nice interface in python to implement hierarchical object tree persistence, has ACID transactions with rollbacks and allows for doomed transactions. At the lower level it uses a stable subset of python’s pickle and supports multiple storage backends.

Thursday had a Linux forum where Thomas Gleixner discussed recent realtime work in the kernel. The low latency and preemption patches that went into the kernel over the 2.6.x series brought a number of positive side effects such as general responsiveness improvements on loaded systems and new debugging mechanisms. From the new debugging facilities and raised threading issue awareness amongst kernel developers, a good 1200 patches containing bug fixes and cleanups resulted.

And development in this are has not come to a halt, current/future work includes getting rid of idle-state interrupts that do nothing by having a tick-less kernel that only wakes up every once in a while when actual work is due and cleaning up general jiffie dependent code in the kernel. Now what’s left to hope is that distributors get their act together and enable the low-latency preemption patches for their desktop kernels. The patches work, they are stable, and they provide a much better user experience. E.g. if you experience sluggish system behavior during crypto filesystem IO, or experience drop outs with your sound system/server, don’t blame it on the kernel people, blame it on your distribution not allowing time slice preemption.

The other talk I attended was held by Matthias Hopf about the Compiz+Beryl merger. The resulting effects he presented excited the crowd as usual, and then he talked some about ongoing developments like input event transformation. After the talk we had some more personal chatter about using the 32bit XRGB visual to add alpha channels to XWindows, and future X extensions to allow applications to notify the server about when to issue EXT_texture_from_pixmap (needed for flicker free composite support).

On Friday, Lennart gave a very good presentation on the state of PulseAudio. He described how it solves the vast majority of audio use cases and can in combination with libsydney finally put an end to the never-ending lack of a portable and usable audio API. Beyond the talk, Lennart and I used every spare minute during the LinuxTag days to discuss libsydneys new API. All in all, it looks like a suitable candidate to replace (or continue) the effort Stefan and I started with CSL (we later suspended the project assuming PortAudio would fulfil the role) to make sound backends transparent.

After lunch, Quim Gil presented present and future of the Maemo platform. The points I personally found most notable are:

The closing talk for this day was the Gimp presentation by Simon Budig, titled "Pimp My Gimp". Simon presenting new Gimp features has become somewhat of a LinuxTag tradition over the years, and as usual new Gimp features managed to excite the crowd, even though we also had the usual glitches like a perfectly tested new clone-tool refusing to work on stage. ;-)

Saturday morning started with a vivid presentation on DBus by Marcel Holtmann. Though no stunning new features were presented, he did a good job on introducing the overall architecture and getting the audience hooked up for DBus applications with his presentation and some simple example code.

After noon, there was a big podium discussion on preventive data mining of personalized records, currently planned to be realized in upcoming laws by the German government. While the forum was quite interesting and definitely necessary to have at a conference like this, the discussion didn’t present surprisingly new findings for anyone following matters already. The discussion was great however, mostly because of the strong involvement of a rather large audience. It was pointed out that there is a massive lack of public awareness for the incredible data mining hunger of the government organizations and certain big companies, and that this is one of the topics that are rather uneasy to educate the majority of the democratic republic on.

Later during the day, Jono Bacon gave his obligatory Ubuntu talk about how Ubuntu cares about user experience and about growing the community. Personally, I still feel that more involvement from Canonical in genuine upstream development such as e.g. the Gtk+ project would be better in the long run for both Canonical and the upstream eco systems.

Finally, there was the Open Source Press talk which started out on how CopyLeft used to be the natural state for information exchange since the beginning of mankind, until publishers came into existence in the 16th century and invented CopyRight restrictions to preserve their investments in terms of hardware and human resources.

It then was suggested that in a completely networked future computer age, we’ll be back to a pure CopyLeft situation. The presenter didn’t really seem to apply his findings though, when in the second half of the session he assumed that all mass-digestible texts must be edited by publishers and thus unconditionally require copyright laws. He also didn’t want to acknowledge that books existed which are sold and published online or that large amounts of interesting text (>= 500 pages) could possibly be written by non-publishers. While this presentation showed that publishers do recognize and ponder about open content these days, it also made clear that they still have a lot to learn.

As a closing note, I’d like to say a big Thank You to the LinuxTag Orga-Team. All throughout the four days there was an exceptionally good program in five presentation rooms, with up to four additional forum presentations distributed across the booth areas. From our perspective overall event organization went pretty well, this also resonated in German media.